Be wowed by this ‘buzzing’ rocket balloon as it zooms through the air!

Blow up, point skywards, release and then be wowed by this ‘buzzing’ rocket balloon as it zooms through the air!

A Little bit of Science – Let’s make this rocket fly in a straight line! 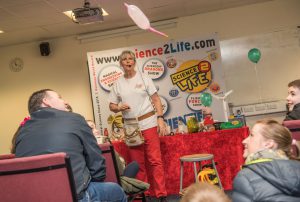 Blow up a balloon. Discuss what is happening to its shape in between puffs.

What are you putting into the balloon? Air

What is the air made up of? A mixture of gases – mainly nitrogen and oxygen molecules.

The gas molecules act a bit like children in a bouncy castle – every time one hits the side a force is exerted on that side.

For the brave amongst you … keep blowing up the balloon until it bursts! At this point the air pressure inside the balloon is too high for the balloon. The skin has been weakened so much it tears and bursts very quickly.

Repeat but this time when the rocket balloon is really long, remove the mouth piece and let it go.

Discuss its motion. Do it again this time filling it with Helium gas…

Now repeat with 2 balloons, one filled with air and the other with helium, release them at the same time after a countdown.

As well as going faster the helium rocket makes a sound with a higher pitch. Why is this? See below 🙂

Balloons are fantastic toys which allow us to easily illustrate energy changes, Newton’s Laws of Motion as well as the properties of materials. When you start blowing into a balloon the balloon starts to get bigger, the skin starts to stretch to facilitate the added air, the air pressure inside the balloon increases. Potential energy is stored in this stretched rubber. We can use this energy to demonstrate the Law of Conservation of Energy: Energy cannot be created or destroyed just changed from one form to another.

If you just keep blowing into the balloon there will come a point when the pressure inside the balloon is too high for the rubber material to support it. The skin weakens rapidly and the balloon bursts. The stored potential energy is then mainly converted into sound energy but also into the kinetic energy of the moving pieces of the broken balloon and a little bit of heat energy.

If you have students who are really scared of loud noises you could just blow up the balloon and release it, the rocket balloons are specially made for this activity and plus they make lots of noise as they fly around the room gradually getting smaller and smaller. As they move they sometimes gain height, which means they gain gravitational potential energy, this is converted back into motion energy as they fall again.

The demonstration I use to illustrate this paradox is ‘borrowed’ from a physics lecturer at Queen’s University Belfast – so my thanks are given. You will need a cardboard box, some Velcro, scissors and a long stick. The box needs to be open at the top and with the help of the scissors one of the narrower sides needs to be cut down the middle from the top to the bottom and then the bottom edges also cut, leaving you with two flaps.

With a piece of cardboard taken from the top of the box make a rectangular strip 10 cm in width and the same height as the box. Add Velcro hooks to the insides of the flaps and Velcro loops to the strip of cardboard in a fashion that will allow you to close the flaps securely. With them closed, place the box on a bench, or the floor, and with the aid of the stick quickly hit the inside walls. Note if one wall is hit more frequently than the others the box will move in that direction. You want to hit the walls so that there is no overall movement of the box – this represents the molecules of air hitting the insides of the tied balloon.

The pressure due to the collisions of the many billions of molecules in the balloon acts in all directions equally. However, when you open your flaps by removing the Velcro strip, the pressure now does not act equally. This is the same as untying the neck of the balloon.

When you now hit inside the box the forward hits are now not balanced by the backward hits which means you have a resultant force acting forwards, so the box will move forwards.

The balloon moves forwards due to the resultant force from the air molecules still trapped inside of it!

Now to the sounds the balloons make – When we talk, sound is produced by passing air over our vocal cords (flaps of tissue in our throats) causing them to vibrate. The vibrating vocal cords make the air around them vibrate and this makes sound. We can change our voice by changing the shape of our throat and mouth, allowing us to make different sounds for different words. Our voice comes out in the form of waves, and it is the frequency of these waves that makes a high note sound high and a low note sound low.

But our voices aren’t quite this simple. You know how different instruments sound different even if they’re playing the same note? That’s down to ‘timbre’. Our voices have a timbre too – they are not just one pure note but a mixture of lots of different waves of different frequencies. When air moves through our throats, it vibrates and you end up with lots of resonant frequencies, or harmonics, which sound different between different people. Someone can sound all squeaky at the same pitch as someone else who sounds normal depending on the harmonics of their voice (explaining why some people sound great during a karaoke session and others, well, they just don’t).

Now the fun bit is when we start thinking about what happens if we breathe helium- which now not recommended as the gas in helium cylinders is a mixture of gases (one being methane) due to the rising cost of helium gas Sound waves behave differently depending on what they are trying to move through. Normally, we breathe air, which is a mixture of gases containing mainly nitrogen and some oxygen. Sound waves generated by our vocal cords move through air at a constant speed of around 350 metres per second.

But helium is less dense than the air we normally breathe and this means that sound waves travel through it much faster than usual (around 900 metres per second) during the short time that they are making their way through the throat and out of the mouth. The pitch of our voice isn’t actually altered, but the timbre or quality of the voice is. Basically, the fast-moving, higher frequency sounds have more power as they float about in your throat, and the lower frequencies get a bit lost. So, our voices end up sounding flat and you talk something like Donald Duck.

In this demo the vibrating neck of the rocket balloons are used to represent our vocal cords. The note from the balloon filled with air is lower than the one that was filled with helium. The fact that the helium balloon moves faster and falls to the ground first is another way of highlighting the fact that the atoms in this gas are moving much faster than the molecules in air.