The contents of this kit will allow you to build the balloon pulley system Scientific Sue uses in her Devastatingly Dramatic Climate Show.

What’s in the kit 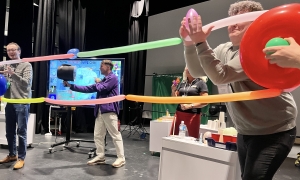 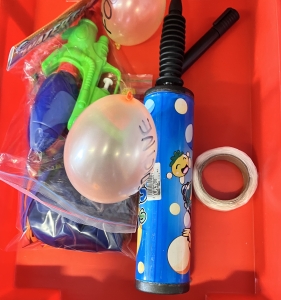 Example of show tray for the virtual experience

You will be guided on how to construct the pulley system by me in the video.

Fill your water pistol – if the one in the box isn’t big enough by all means add your own!

In the video I suggest that you the teacher use the water pistol, you will be the rain in the storm.

If you have an airzooka I will also guide you to choose a 5th volunteer who will be the wind in the storm. Have them stand between 1-2 m away from the other volunteers. Guidance must be given not to release air into anyone’s eyes – safety googles are recommended.

A pulley is simply a collection of one or more wheels over which you loop a rope to make it easier to lift and/or move things. 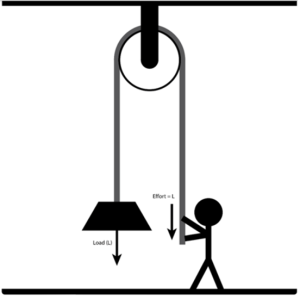 Pulleys are examples of what scientists call simple machine. That doesn’t mean they’re packed with engines and gears; it just means they help to make work easier for us and can even help us multiply forces. If you want to lift a really heavy weight, there is only so much force ore muscles can supply, even if you are extremely strong. However, by using a simple machine such as a pulley you can change the direction of the pulling force (and use gravity to help with the lift) and with increasing numbers of pulley wheels can effectively multiply the force your produces.

The more wheels you have, and the more times your loop the rope around them, the more you can lift.

If you have a single wheel and a rope, a pulley helps you reverse the direction of your lifting force.

Now if you add more wheels, and loop the rope around them, you can reduce the effort you need to lift the weight. Suppose you have two wheels and a rope looped around them, as 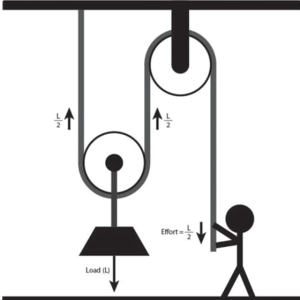 in the figure below. The 100kg mass (1000 newton weight) is now effectively supported by two sections of the same rope (the two strands on the left) instead of just one (ignoring the loose end of the rope you’re pulling with), and this means you can lift it by pulling with a force of just 500 newtons—half as much! That’s why we say a pulley with two wheels, and the rope wrapped around it this way, gives a mechanical advantage (ME) of two.

A block and tackle is a cable system primarily found on cranes and boats that involves two pulleys and a cable or rope. The mechanism consists of one fixed pulley and one movable, usually hanging, pulley. A single rope is fixed to on or near the carriage of the fixed pulley, loops down and around the movable pulley, then back up and around the fixed pulley. A hook is attached to the underside of the movable pulley, and by tugging on the rope, the hook will lift or lower. 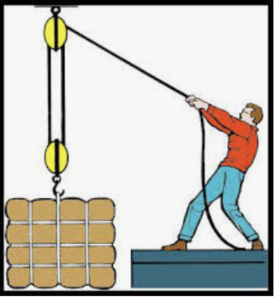