1 in stock (can be backordered)

The Air Zooka is a fun toy cannon which blasts out swirling columns of air!

The Air Zooka is a wind tunnel in miniature, trapping air in its conical rear quadrant and firing it forward with elastic speed for maximum disruption.

Ruffle someone’s hair or cloths, push papers off tables, spook someone as the turn the corner – the possibilities are endless.

Paired with a smoke machine, this air cannon will fire beautiful smoke rings!

The proper name for this concept is the vortex generator, because the rings that are being shot out of the Air Zooka are actually flat vortices of air. 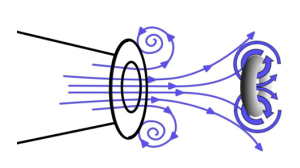 How the air moves when leaving the Air Zooka

The circle shape is created because the air in the centre of the air zoom is exiting faster than the air around the rim of the air zooka – hence this toy can be used to illuminate Bernoulli’s principle which states: The faster the flow of air becomes, the lower the pressure air becomes.