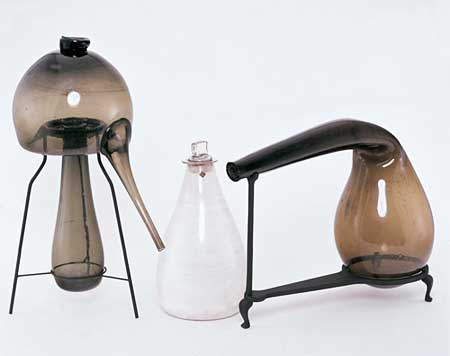 Born in Bordeaux in 1728 to an Irish father and a Scottish mother, Joseph Black spent his working life in Scotland. He is considered one of the world’s most eminent chemists and one of the founding fathers of the science of chemistry.

Black was a modest man and an excellent teacher. His meticulous research techniques were an inspiration to others in his day and have remained so today. In 1750, gases were still thought of as mysterious substance. Black changed all that. Through a series of careful experiments, he discovered the first gas, carbon dioxide; and he proved that it was present in the atmosphere, that it behaved like an acid, and could take part in chemical reactions, just like solids and liquids.

In 1750, Black began experimenting with magnesium carbonate and calcium carbonate. By rigorously weighing everything, he found that when he heated 1 oz (28g) of magnesium carbonate for an hour it lost 7/12 of its weight. Something must have been emitted, and Black spent 2 years chasing this volatile substance.

After a series of experiments, he showed that it was a gas which he called ‘fixed air’, and which we now know as carbon dioxide. 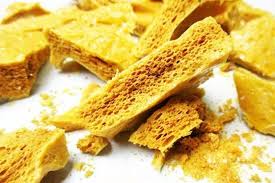 When the vinegar (ethanoic acid) is mixed with the baking soda (sodium hydrogen carbonate) a chemical reaction takes place. Lots of carbon dioxide bubbles are formed in a very short period of time.

This experiment is an example of a reaction between an acid (vinegar) and a base (baking soda). Such reactions typically form a “salt” and water.

Because the acid component in this experiment is ethanoic acid, it allows the production of one of the products to be sodium ethanoate. That is the stuff referred to as the “salt.” In this experiment, the base (sodium hydrogen carbonate) has a carbonate component; hence carbon dioxide is also formed.

The fancy shorthand symbols used by scientists to represent our reaction are:

The NaC2H3O2 is the salt called sodium ethanoate. The H2CO3 (carbonic acid) then breaks down into water and carbon dioxide:

This break down is rapid and the honeycomb mix expands quickly.

Carbon dioxide in liquid form is found in many fire extinguishers.  For it to be liquid it is kept at certain pressures and temperatures; an extinguisher can only be used once for this reason.

When released the liquid CO2 quickly changes into a gas.  This gas is heavier than air and sinks downwards. If aimed correctly the gas forms a blanket covering over the fire thus blocking out the oxygen required for combustion. The fire is extinguished.

Everything is made of chemicals, and all chemicals are made of tiny particles called atoms.  During a chemical reaction, one group of atoms are shuffled and taken apart, they get mixed with the other atoms to form a different group and make a new chemical.  Similarly, when vinegar is mixed with bicarbonate of soda (baking soda) one of the new chemicals formed is the gas CO2.  The bubbles of this gas can be used to turn a pop-lid drinks bottle into a most amazing volcano!