These balloon racing cars are a great energy changing toy. 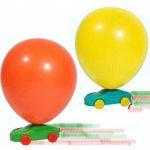 This is a fun ‘energy changing’ toy. Gadgets which change energy from one form to another are called transducers.

When air is blown into the balloon the balloon stretches and stores elastic potential energy.

When released the stretched balloon very quickly returns to its originally shape – pushing the air out of the balloon.

The toy’s design makes use of this physical property and uses the expelled air to move the car forwards. This is a classic example of Newton’s 2nd Law of Motion.

The mass of the balloon car will greatly affect its acceleration at the start.

Newton’s 2nd Law of Motion states that the acceleration of an object is equal to the amount of net force acting upon it divided by the mass of the object. The less mass the car has, the faster it will accelerate!