Shop
You are here: Home1 / Shop2 / Forces and Energy3 / BALLOON BALL – Glow in the Dark

BALLOON BALL – Glow in the Dark 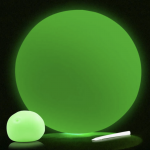 Insert the straw into the ball and blow into it to inflate it into a large balloon. To return it to the original shape, simply re-insert the straw to fully deflate.

Can be inflated and deflated over and over again.